Do You Know Your Dog's Emotional Age?

The Seven Year Rule and Your Dog’s Emotional/Behavioral Age

When I was a child, I remember hearing our family veterinarian telling my father about the ‘Seven Year Rule’ for calculating our dog’s age. The idea is that a dog will age seven years to every one of our human years.

My first dog, Mugsy, was a spunky Jack Russel Terrier mix who lived to the ripe old age of 15 – which would have made him 105 in human years!

Of course in recent years, there has been a lot of talk about how the 7 year rule doesn’t really apply in all cases.


Here's a handy chart for calculating your dog's age in human years:  http://pets.webmd.com/dogs/how-to-calculate-your-dogs-age

But what interests me more is that the ‘7 human years to 1 dog year rule’ has always been thought of in terms of physical age of the dog.

What about mental age?  Or social age?  Emotional age?

Have you ever thought about how your dog changes mentally, socially, and emotionally over time?  Most of us notice the (blissful) differences between a 6 month old puppy and a mature dog.  But have you ever stopped to think about how those changes come about?

Have you considered your dog’s ‘behavioral age?’

Through the years, I’ve worked with and trained dogs ranging in age from 8 weeks old to 16 years, and I’ve come to believe that the good old “7 to 1” rule applies very much to the behavioral age of most dogs.

Additionally, as my dog training career heads into its 26 year, I am more and more convinced that dogs and humans share the same basic emotional and social developmental stages.  This probably goes a long way towards explaining why dogs have been domesticated for so long, and why we still get along with them so well!

So – what does this mean for you and your dog?  Well, let’s first take a look at the 7 to 1 rule in regards to dogs’ emotional, social, mental and behavioral development.

Say you have a 6 month old pup – if we do the 7 to 1 rule math, your pup would be the equivalent of a three and a half year old child.  Anyone who has spent time with a rambunctious pup and a 3 year old toddler can probably readily see the similarities!  The pup is aching to be a big dog – exploring its entire world with its nose and new teeth – itching to try out its newly found coordination and strength.

Likewise, the toddler is walking, talking and mastering her independence with that shudder-inducing phrase, “NO!”

Both the pup and the toddler are exploring new levels of independence and confidence.  And we look at them both and know they are far from the ‘finished’ adult products they each think they are.

Fast forward to the 2 year old dog.  Compared to our human toddler, he’s maturing exponentially faster.  Using our 7 to 1 rule, our dog is now 14 in human years – a young teenager.

And again, anyone watching the painfully awkward stages of a human teenager can often suddenly relate to the same social ineptitude and struggles of a 2 year old dog – if they stop to think about.

Now let’s move forward in time again.  Our canine friend has just hit 4 years old.  Using our 7 to 1 rule, our dog is (finally) officially an adult; probably around 28 years old. 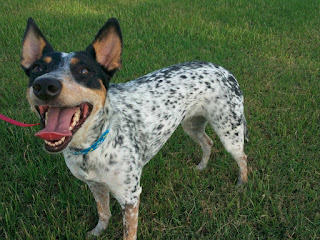 At this age, he’s established where he belongs in his family.  His social circles are pretty well defined and fixed He has set social circles of intimate friends and family; and while he can still make new friends, he takes a bit longer to warm up to strangers.  He may be less tolerant of new dogs or people who are socially inept and get in his space.  Like most humans of the equivalent age, he’s begun to be somewhat more selective about who he hangs out with.

This is all assuming our 4 year old dog has had mostly positive experiences throughout his social development.  Dogs, just like humans, carry memories of traumatic (or even just annoying) interactions with them through their lives.  Imagine a 28 year old human who had less than ideal childhood, teenage, and young adult experiences.  That 28 year old human may be less socially developed than another human with different, more positive life experiences.

How about a 6 year old dog?  If our 7 to 1 rule holds, this dog is now around 42 human years – a fully mature adult, who most likely still feels quite spritely and ready for life, but who is even more set in behavior patterns and routines.  Even more than our 4 year old dog, this dog has a very clear idea of who he wants to be friends with, and who he doesn’t.

So often, I have clients with dogs between the ages of 5 and 8 or so who are surprised their dogs are not itching to meet and play with every single dog they see.  Owners are caught off guard when their mature dog snaps or growls at a puppy who has just jumped on its shoulders.

But again – if we think about the emotional and behavioral age of the 5 to 8 year old dog (35 to 56 human years), I think we’d be hard pressed to find many humans in that age range who are fans of having toddlers or teenagers jump all over them exuberantly and inappropriately.

Even worse, imagine going to a party for people your own age, and suddenly being surrounded by adults who are not acting their age, but are behaving like toddlers or teenagers.  This is generally disconcerting to even the easiest-going of folks, be they dogs or humans.

Often, it’s only as our dogs age that we begin to really pay attention to their changing social, emotional, and behavioral needs.  As hearing and sight begin to fail, arthritis kicks in, and sometimes cognitive function declines, owners are often caught suddenly by how rapidly their canine friend has aged.

It may seem quite sudden, and certainly 7 years of advancement to each year of ours is quite rapid.  But if we pay attention to the 7 to 1 rule throughout our dogs’ lives, we can be much better owners – more in tune with changes in social, emotional, behavioral, and physical changes in our dogs.

Where your dog is on the 7 to 1 behavioral development scale should play a part in your daily decisions about your dog’s overall health and care – from how much mental and physical exercise your dog needs, to whether or not it’s the right time to add a new puppy, and everything in between.

That's it from this end of the leash.

Jennifer Hime is a dog trainer and behaviorist, the owner of Front Range K9 Academy in Wheat Ridge, CO.

Jennifer Hime, Dog Trainer
You can find me at http://www.k9counselor.com or http://www.horsetoothwhippets.com